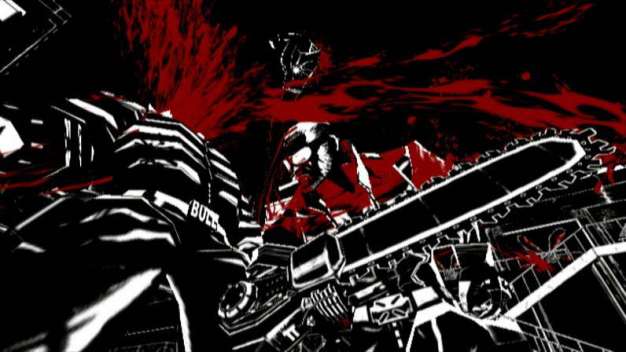 I have to admit, I was a little upset at Todd Howard’s Wii comments the other day. But what better way to blow off some steam than to try out the Wii’s most “serious” title yet, MadWorld. The Platinum Games-developed project has been much hyped not just for its uber-violent content, but also because some of the development team formerly worked for Clover Studios on the critically acclaimed Okami. Just like the wolf-based adventure, MadWorld is fronted by a unique artistic style. Unlike Okami … pretty much everything else.

The demo level didn’t waste any time letting me get my hands dirty. Baddies were everywhere, and I was able to experiment with our hero Jack’s wonderful arsenal of blood-dispensing attacks. Like other Wii games, MadWorld was easy to pick up and get the hang of the controls. Tapping the A button handles basic punch combos, while holding A allows Jack to grab onto an enemy. Now the fun begins: While holding an enemy, I commanded Jack to toss him with an overhand throwing gesture from the Wiimote. The environment I played in allowed allowed Jack to throw enemies into fans, buzzsaws, dumpsters, and even a circuit board. Each different object produced a unique fun killing animation. Finding new and fun ways to kill the bad guys was what made the demo so entertaining.

Pressing the B trigger activates Jack’s chainsaw for making quick, bloody messes. Just swing the Wiimote vertically to cut an enemy in half symmetrically. Less compulsive gamers can swing the Wiimote horizontally to separate legs from torso. There’s something there for everyone, really. 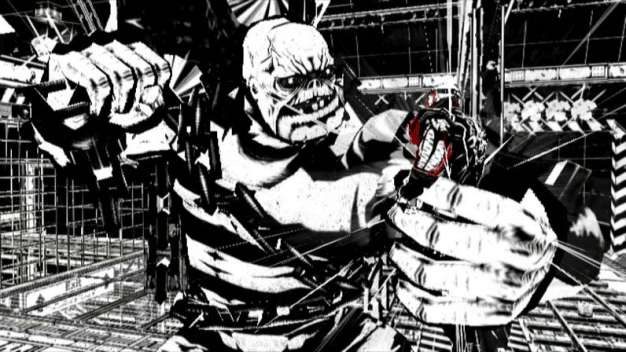 Although you could plow through almost every single enemy with just the chainsaw, there’s plenty of reasons not to. Not only are there various dangerous obstacles to throw baddies into, but Jack’s finishing moves had the spectators behind me oooing and aaahing. To get the opportunity to really destroy an opponent, I stunned him with a quick A-button combo or powerful uppercut (swing the Wiimote upwards without the chainsaw). When the finishing logo appeared, I pressed the B button and watched the animation begin. Depending on what Jack was doing on screen, I was prompted to either slam the Wiimote down to jam the chainsaw through his face, pull the Wiimote and nunchuk apart to snap the poor dude’s neck, or pull off some other sick move seemingly designed to make the ESRB cringe.

More ways to induce carnage include slamming barrels, signposts, or tires down onto your victims’ faces or using a weapon (in this case a spiked club) to increase the power of the standard combo.

The bottom line is that there are a lot of ways to bring the pain in MadWorld. The guys at Platinum Games seem to have a very firm grasp on how to make a strong Wii action game. They mixed just the right amount of motion control into the game so that gestures don’t get confused for each other. I came away thinking the combat was a lot stronger than that of No More Heroes, and if Platinum can keep their entire game as fresh as the level I played (no small task), they’ll have a much stronger game as well.