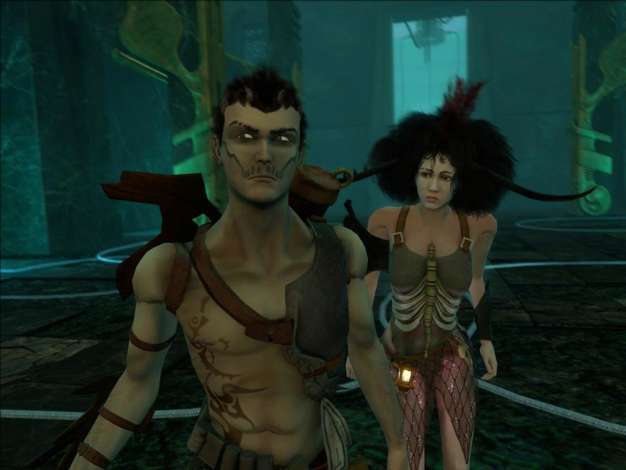 I haven’t seriously played a game on my computer in over six years. I’m a console guy through and through, so it has to be a pretty special game on the PC to not only pique my interest but also get me so curious that I actually install it on my laptop and then play it. Enter Zeno Clash, a game TVGB has been following since almost day one. Since we got the first screens for the game we’ve been hooked on the unique gameplay and down right odd world it takes place in. Luckily the game’s developer, ACE Team, was gracious enough to send us the first three levels of the game for some quality hands-on time.

Having payed pretty close attention to the game I knew a bit about what to expect, but once I got started it was easy to tell that this game is most likely going to be immensely different from other FPS games out there. Sure the world it takes place in is noticeably original, but once you play the game it’s the gameplay and general design of the game that really stand out, especially for a game that takes place in first person. I’d even hesitate to call the game a first person shooter and there are plenty of reasons why.

The first one of these reasons is that the game, or at least the parts we played, is clearly not about shooting. Yes, one does shoot and there are plenty of weapons to pick up, but since Zeno Clash also has what appears to be a decently robust hand-to-hand combat system the gameplay veers away from letting bullets fly and steers over towards dodging, punching, and strategic shooting. This is also aided by the fact that Zeno Clash‘s levels are not linear stages but more like enclosed arenas where you — as main character Ghat, who has been cast out by his family into the harsh world — take on a set amount of bad guys using weapons provided for you.

It’s probably best to explain this the same way the game did; by taking you through the levels. After a brief training mission with a mysterious ghost who says he knew you when he was alive, Ghat finds himself in front of a dead Father/Mother, the leader of his tribe. Of course the player has no clue what is going on and it doesn’t look like they will until the entire story of Ghat unfolds during the game, which will jump around on the timeline. After running away Ghat is chased down by three of his fellow tribesmen who attempt to stop him from leaving. Luckily Ghat has a female friend named Deadra who is helping him out. 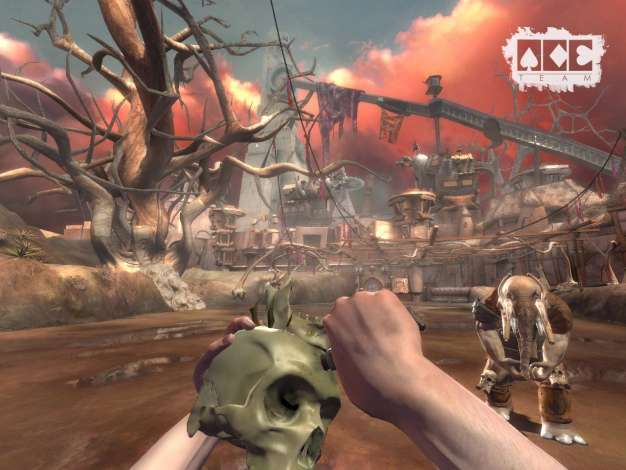 Thus the player is thrust into the first fight. The screen kicks into slow motion and as the enemies approach and the game tells players who they are fighting by flashing classic style versus information (painted versions of each participant in the battle’s face). This first arena was pretty small and simply showed the hand-to-hand combat off. Players can do punch combos or strong attacks, counter and even grab dazed enemies and start kneeing them in the stomach, tossing them across the level or, if their life is low enough, finishing them off. Attacks are controlled with the left mouse button and defending, dodging and countering is controlled by pressing the space bar at the correct moment.

I want to say the combat works really well, and there are many things that ACE has done right with it, but first person fighting has always felt clunky to me. To date this is some of the best I’ve played with, but it remains to be seen if it really can support and entire game of simply duking it out with different opponents.

ACE seems to realize this though as once I moved onto the next battle I was introduced to guns and a new variety of opponents. While it seems that basic opponents will either shoot at you or challenge you with fists I did get to check out a few other bad guys. The first being a giant elephant like creature who wasn’t too fazed by me measly fists. Luckily I found a hammer in the arena. The hammer took a bit longer to swing but packed some more wallop and allowed me to stun ol’ mister charge and bash so I could beat him up. After killing him I had to take out a few more guys using the fist and shooting skills I had learned earlier. Shooting works like any other FPS (though the guns don’t look the same at all) except since melee and punching is the norm players have to hold down the right mouse button to shoot and then click the left mouse button to fire. Not too much of a hassle but I did find myself forgetting sometimes and doing the exact opposite of what I wanted to. 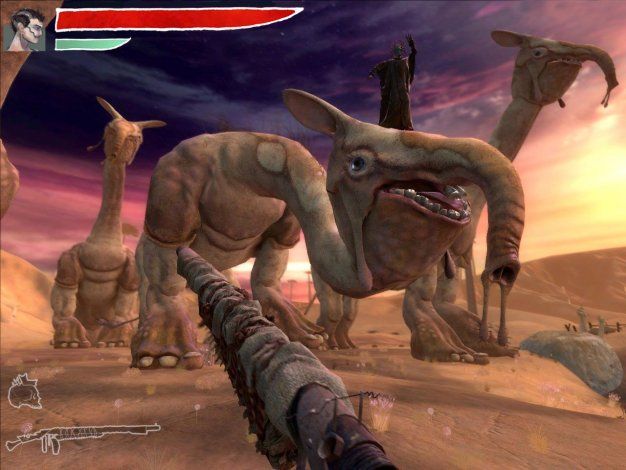 Ghat can pick-up guns and health and life (small flowers) that are in levels and even has some grenades that are available to him, so how you take out enemies can vary. Still it seems ACE wants each arena to vary in its goal as the final part of the game I played was far different in its challenge than the other levels. After hiking into the desert Ghat and Deadra are in need of food. Ghat goes hunting, finds a few pistols and the player is tasked with collecting three furry creatures while fending off the desert bugs who are attacking and maneuvering around some giant dinosaur looking creatures. However, once Ghat gets back to Deadra it turns out a bounty hunter has caught up with them.

The hunter challenges Ghat to a fight and mounts one of the dinosaurs and starts to throw furry creatures strapped with explosives at Ghat. The creatures will run towards Ghat until they get close and then the bounty hunter snipes them off causing them to explode. Meanwhile the player must shoot at the far off bounty hunter with his rifle while trying to avoid the exploding animals. It would be considered in most games a boss, but in Zeno Clash each fight is just another level.

If ACE is able to keep the variety and complexity of the battles as fresh as it did in the first three they’re going to have a seriously fun game on their hands. They need to iron out a few kinks here and there, like the fact that guns are a bit hard to pick up and making sure they have the hand-to-hand combat nailed down as much as possible, but Zeno Clash is definitely ambitious. They’ve developed a truly fantastical world and we hope that the entire game lives up to it.