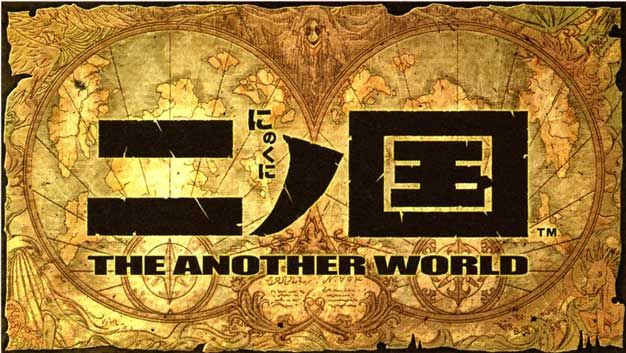 I can’t decide if Ninokuni‘s English title, The Another World‘, is deceptively clever and charming, or just a symptom of the lack of articles in the Japanese language. I suppose it’s a little bit of both. At least we can all agree that it’s a better English title than Infinite Undiscovery.

Regardless, Ninokuni has garnered instant attention thanks to the pedigree of its creators. Acclaimed developer Level 5 (Dark Cloud, Dragon Quest VIII, Jeanne D’Arc) will leverage the artistic genius of Studio Ghibli (My Neighbor Totoro, Princess Mononoke, Spirited Away) in making their latest DS RPG. I’ve got to say, it’s a great move for Level 5. Not only are a million anime fanboys like myself drooling at the thought of this game, but it looks beautiful. The feature in the latest Famitsu provides more than just gorgeous screenshots, though.

Ninokuni stars a 13-year-old boy who recently lost his mother. Feeling as if it’s his fault he sinks into despair, when suddenly a mysterious fairy appears. The fairy gives our hero the ‘Magic Master’, a sorcerer’s spellbook, and guides him on to the titular Ninokuni, a parallel world. The boy will traverse the three countries of Ninokuni- the lush, green kingdom of Goronelle; the desert paradise, Babanasia; and the modern empire, Bourge- in his quest to bring his mother back to life.

Once in Ninokuni, the hero will meet parallel (but twisted) versions of his acquaintances from the real world. Frank, the neighbor’s cat in the real world, is the aloof Feline King of Goronelle seen lounging in the screenshots. Apparently, he’s the first king you meet in the game, and he has no inclination to deal with matters of state, much less help you. Instead, he spends most of his time sleeping. 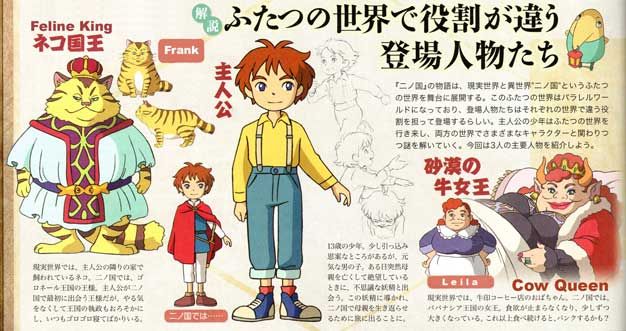 Meanwhile, Leila, the lady from the dairy shop in the real world, is a massive cow queen in Ninokuni. She rules over Babanasia, where she indulges her insatiable appetite. She eats so unstoppably that she is constantly getting larger and may even be in danger of bursting. As you can see, this game world seems to be as imaginative and wacked-out as any Ghibli film.

Aside from the charming setting, Ninokuni features another rather unique quirk. As was suggested in our earlier coverage, the ‘Magic Master’ that comes with the game does indeed factor into the gameplay. Ostensibly identical to the tome wielded by the hero in-game, the book holds the key to learning magic and unraveling the mysteries of Ninokuni. It seems that players will be able to find spells, keys to codes and other valuable information to use in the game. This novel mechanic could naturally turn out to be just a gimmick, but it certainly has potential to be really, really cool. I’m praying for the latter.

About the author: Steve Gilhool

I've been gaming for as long as I can remember. My first console was the Intellivision. I would often play my favorite game, Night Stalker, until my dad spilled water on the console. Since then,...  Read more...