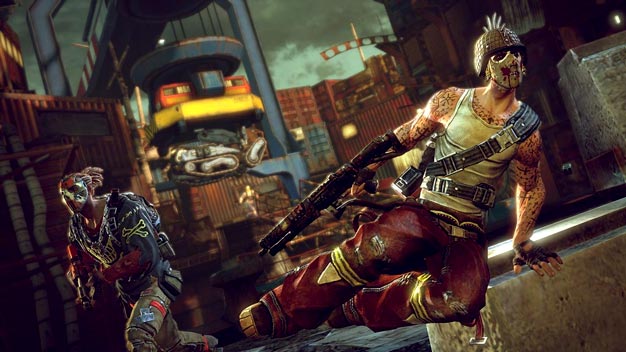 Brink is not your average shooter. In a genre criticized for cookie-cutter combat, Rambo’d out characters and clichéd storylines, Splash Damage wants Brink to stand apart. And as crowded as the FPS market is, the developer needs it to stand apart.

That much I knew before getting my chance to test out Brink during a media-only event a few weeks ago. After only spending about 40 minutes with the game, it became clear that Splash Damage isn’t just trying to make Brink stand out; it’s aiming to rewrite the entire playbook of FPS design.

Lead writer Edward Stern sat down with me to provide context for the changes I was about to see.

“We come from classic, hardcore FPS shooters. Which is great, but they are punishingly hard to get into if you’re not already up to speed. Our goal has been to make it as accessible as possible — people who don’t think of themselves as FPS gamers or maybe even gamers with a capital ‘g’ – but without sacrificing any of the gameplay.”

The other re-defining element for Brink is the merge of single, co-op and multiplayer into one, story-driven campaign. Stern explains: “Another big problem we were trying to solve…you play a single-player version of a game and you’re good at it. You’ve beaten the game! Then you step into multiplayer and you get murdered. The whole point of this is to make the experience seamless –drop in and drop out. It’s all the same game. It’s not like you get good at one version of the game and that doesn’t prepare you for the other. It’s deliberate.”

Those without an Internet connection can play the entire campaign against AI bots. Those connected, can see when their friends are online and join in. Splash Damage says it can swap players in one ticket of gameplay; no quitting or restarting needed.  During any given time you could be playing solo against AI, and then all of a sudden be playing co-op or multiplayer against human players. Brink spent considerable time developing AI bots to perform similar to human players. It’s too early to say how good of a job they’ve done, but it was hard to tell the difference between human and AI during my time with the game. 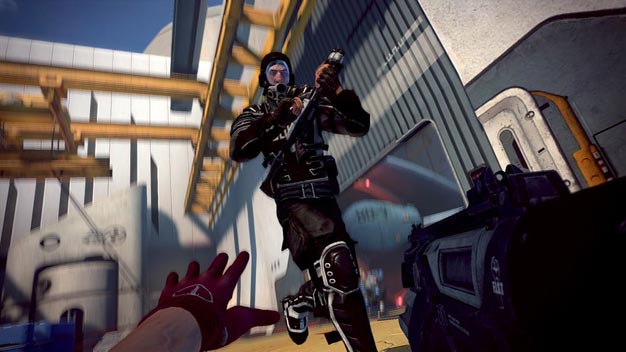 Following our chat, I began by progressing through the initial story.  Brink’s storyline weaves a complex presentation of conflict that moves away from the classic good vs. evil. It’s here where the first convention defying aspect of Brink can be seen. Brink takes place on “The Ark,” a futuristic, floating city originally conceived as to develop self-sufficient, sustainable habitats. However, the rise of the Earth’s oceans has caused the population to explode from 5,000 to 50,000, draining all resources and putting the entire city on the “brink” (get it?) of all-out civil war.

Players choose between two sides: Security or Resistance. The Security is made up of The Ark’s original founders who appear to be hoarding more resources than they need. The Resistance includes a band of refugees looking for their fair share. Each group equally believes in what they’re fighting for: Security seeks to maintain order and keep the city from crumbling, while the resistance sees Security as the oppressors. It’s up to you to choose your alliance and see how it all shakes out.

Once you select a side, it’s time to design your character, and there’s no shortage of options. Brink characters are a distinct blend of cartoony mutants, and there are several different levels of customization.  Archetypes control the general theme of your character. The versions presented during the event included The Geezer, The Nose, The Chin, The Sensei and The Smooth. Hair, facial features, head gear and clothing can be altered. Body size, tattoos and voice type with varying accents are also customizable. Stern calls Brink’s character selection an “MMORPG depth of player customization,” and it’s easy to see why.

Brink is a pure tactical, objective-based shooter, and it can be played in three ways.  “Containment” follows the full story of the war and The Ark. “Free Play” allows for Containment missions to be played in any order with customized settings. “Challenges” include missions that help bolster skills in different scenarios. XP is earned for completing objectives or assisting teammates which will raise your level and unlock new abilities and gear. New weapons and attachments are granted once players complete various challenges.

Objectives can be toggled and selected via the Objective Wheel, a HUD that’s activated by tapping up on the D-pad. The most important objective is always at the top of the wheel, but several sub-objectives can be explored, as well.

I played as both team Resistance and Security as a Medic and Engineer. Most time was spent on Container City, a Favela-like encampment of rusty shipping containers that Ark refugees now call home. 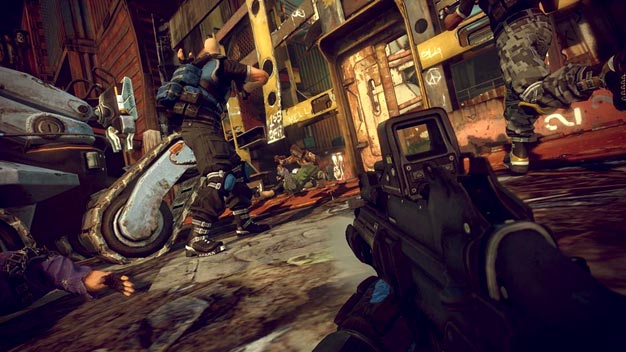 Brink gameplay is extremely fast. The real speed comes from its S.M.A.R.T (Smooth Movement Across Random Terrain) feature. This allows players to scale virtually any obstacle. Vaulting over or sliding under anything in your path, all at the touch of a button. This drastically widens each map, but can leave you vulnerable if you execute a move at the wrong time.

Playing as a Medic on an “Escort” objective, you’re tasked with doling out health packets as your team moves forward to breach a supposed bio-weapons lab.  Although extremely important to the overall group’s survival, this class puts you in the back seat to the real action. Those accustomed to the run and gun of Team Deathmatch will have a hard time with Brink’s Medic and Engineer classes, but it should help wet the feet of those new to the genre.

Following rapidly changing objectives, set within the frenzy of multiplayer FPS, also takes some getting used to. The objective wheel at times was hard to process, but it’s more a nature of the environment than any design flaw.

It was also difficult to appreciate how the narrative blended with multiplayer environments in the limited time allowed with the game. However, one thing was certain: less than an hour with Brink left me wanting more.