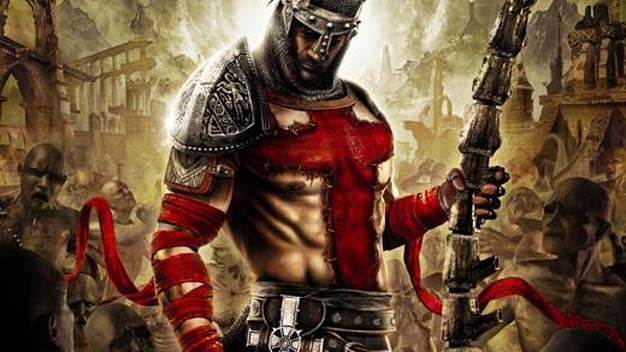 With just a few short days before Dead Space developer Visceral Games unleashes hell upon the gaming masses in the form of Dante’s Inferno, the game’s executive producer and creative director Jonathan Knight joined us for a roundtable interview to discuss comparisons to God of War, the game’s controversial marketing campaign, and Dante’s penchant for body modification.

What drew the team to Dante Alighieri’s The Divine Comedy? Did you ever consider any other famous works of literature like, say, The Iliad or Beowulf?

Dante Alighieri incredibly synthesizes hundreds of years of thought about what the medieval afterlife would be like, who goes there and why, what are they punished for, what are the sins and how is it structured. He just kind of synthesizes all that thinking into a seminal work, which is The Divine Comedy. I read it and it was so full of material that it seemed like rather than borrowing a couple of ideas from it, we should tackle that vision in its totality and do a game loosely based on the poem.

And unlike any other source it actually already has levels.

Jonathan Knight: [Dante Alighieri’s] famously known for mapping hell. Pretty much any copy of the book you pick up has a map on the inside cover. That’s part of that ongoing creative impulse, to try to visualize and draw and map out his mental picture of hell, which is very structured. There are nine circles and each one almost has kinda a boss character, a guardian or a monster. Each circle has specific weather and geography and people categorized by the sins they’ve committed. It’s an incredible map, and for centuries people have been drawing that map in their own way. I just sorta feel like the game is an extension of that ongoing tradition of visualizing his world.

Considering the richness of the subject matter, were there any challenges trying to maintain focus and show restraint to make sure that you guys met you deadlines?

Jonathan Knight: There are always deadlines in game development. There’s always a box that you have to play in. Fortunately, EA’s been incredibly supportive of the project and we were given a lot of resources to build the game. We feel like we absolutely had adequate time to build the game…and we’re really happy. But honestly, I don’t think that we have achieved the full extent of Dante Alighieri imagination. There were entire monster and sequences that we just didn’t get to. I think his vision, his imagination is way bigger than what we could do in one game.

There are whole elements of the poem that operative on different levels, political levels and theological levels. We said from the beginning that we wanted to do a game that was super fun to play and entertaining. That we were going to be focusing on his vision of geography, characters, setting and theme. That we were going to do all nine circles of hell. And we scoped the project to that vision. When it comes to some of the more sophisticated elements of the people, some of the highbrow aspects of the poem, I think those are kinda best left for a reading of the original material. The game is not meant to be a replacement or even remotely a substitute for the original material.

What we’re hearing from fans is that actually more and more people are wanting to read the poem now [because of the game]. They’ve picked up a copy and are learning more about Dante and more about The Divine Comedy. [The game is] more of a gateway into that whole world, and it’s pretty cool that it’s worked out that way.

In the gameplay, the user can focus on the holy or unholy powers; how important is that to Dante’s character development and how does it affect the game’s storyline? Are there different endings depending on which power you focus on?

Jonathan Knight: That aspect of the game is largely a game design decision. It impacts the gameplay throughout the game [but] we never intended it to be something that diverts the story into a truly holy story and a truly unholy story. The game does come together at the end with one ending. For us it was a way of saying “Here’s a guy who is very conflicted, he’s done a lot of bad things but he has a lot of good in him also, like most people.” He has very opposing weapons [to represent that conflict]. He’s got this holy cross power, that’s kinda magical and spiritual in nature and is more about crowd control than bludgeoning people and then he’s got this brutal, savage scythe that he can cut people’s heads off with. We wanted to offer those two types of animations, those two types of play styles, those two upgrade trees. The whole system really ties into that. There’s holy magic. There’s unholy magic. There are holy relics. There are unholy relics. But at the end of the day, it’s all about crafting your version of [Dante] in terms of how he kills things and how he treats the damned. But the story kinda comes together at the end with one ending. 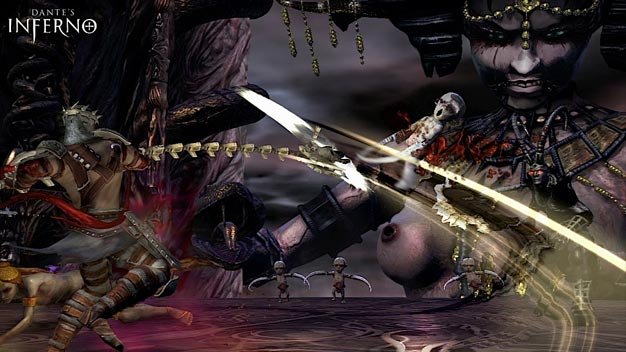 Since the The Divine Comedy is essential a three-part book, are you considering a full trilogy?

Jonathan Knight: I don’t have any plans to announce today with regards to future projects. We’re just really focused on Inferno. I can say that we’ve got some really exciting downloadable content coming for Inferno. It’s going to be more than just items and skins. There’s definitely going to be an extension to the fiction, there’s definitely going to be some pretty significant DLC associated with the game. That’s what the team’s focused on right now.

When Inferno comes out there, we’ll obviously see how people respond to it and hopefully have more to talk about in the future, but right now we’re sort of focused.

Did you guys draw upon artists who have already made depictions of The Divine Comedy such as Sandro Botticelli and Gustave Dore, or was this something you guys devised straight from the text?

Jonathan Knight: Well, a little bit of both. I think we definitely had a really tremendous and exciting research phase. There’s so much material out there, like Botticelli who was one of the first artists to do an illustrated version of The Divine Comedy roughly a generation or two after Dante and kinda reprints the poem with his illustrations. That sets off a long tradition of artists coming to the material and figuring out a way to visualize it. We studied all of that and plastered our walls with it, were influenced by all of it.

I would say Auguste Rodin was probably one of the bigger influences. You see sorta Rodin-inspired sculptures throughout the game. His Gates of Hell are literally replicated in the game in the first level, as you break into hell. Rodin spent ten years with the poem, and he really captured the torment of the damned. Dore was a huge inspiration. I think you’ll see his King Minos looks a lot like ours, although ours is a little darker and angrier because it’s a videogame.

William Blake…. you know a lot of those medieval painters like Boche and Bruegal who did themes from the afterlife, they’re not specifically Dante but they’re kinda in that medieval weirdness, those crazy visions of hell. I think that inspired a lot of the gluttony stuff.

One of the biggest influences was Wayne Barlowe, who’s kind of this 20th century guy who bit off Hell in his paintings. He’s a working concept artist in the film business and we contracted him and he did a lot of the initial drawings for us. We wanted something that felt like it was in the tradition, but we also wanted to do our own thing and branch out and give it a fresh feel.

How do you feel about the comparisons to God of War and other action franchises, and what are you doing to set yourself apart from those titles?

Jonathan Knight: We’re super flattered by those comparisons. God of War is the granddaddy of the genre right now. They were influenced by Devil May Cry before that. There’s definitely a strong tradition of Japanese fighting games that has influenced what’s going on in this genre in the west. We’re big fans of Bayonetta and I think all those games are influences, and we’re just kinda flattered to be mentioned as part of that.

We tried to set ourselves apart in a couple of key ways. One was really tackling that medieval Christian mythos, specifically The Divine Comedy, and seeing if we could take a piece of literature – obviously a lot of things changed about it in turning it into an action game – and deliver an adaptation of that existing piece of literature. [We wanted to] do levels that have never really been done before in terms of the horror of those specific sins.

On the gameplay side, we wanted to create a character that had a duality to him. Rather than just one style of finishing off enemies over and over, we wanted to give two halves that allow you to earn experience down either a holy path or an unholy path. To have that effect the moves of the character and over time effect which abilities you gain. That was something we tried to bring to genre, that moral question of whether to punish someone of absolve them. You can do that with enemies but also with the damned once you’ve learned what their sins are. But to do that in an action way, not in an RPG way. [We wanted to] do it in a way where you have to make those decisions in a split-second in combat. We wanted to create giant demons that you could drive around hell like giant vehicles. When we bit that off six years ago, that’s not something we had seen done before. Other products have tried to do that since then, but that was something we really wanted to bring to the game, give that sense of power.

At the end of the day, the story is very unique to the game. We think people are going to find the story fresh and special. Those are all the ways we think we are setting ourselves apart.