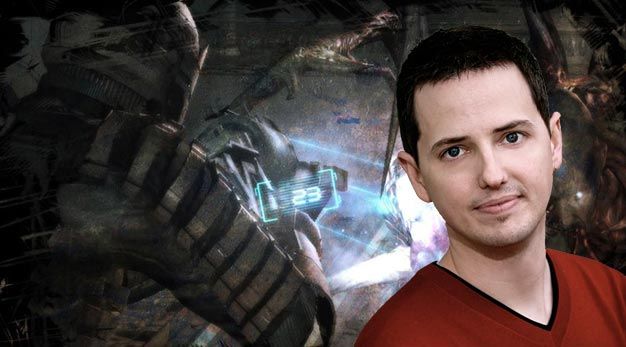 So far in Music in Games we’ve been talking to bands whose music has shown up in games. Interesting stuff and it has let us talk with some great musicians. However, the world of gaming music isn’t just growing larger with its close ties to licensed music, it is also growing with its focus on original high quality scores for games. And scores for games have come a long way since the days of the Mario theme. They involve full orchestral compositions and rival most film scores. The new wave of gaming composers coming out of the woodwork are offering up a new way to perceive what we think of as a score for a game and anything else for that matter. It is one of the most interesting, but underplayed, subjects in gaming and we here at TVGB are proud to be able to bring game scoring a bit more lime light.

With that being said, we were thrilled to be able to talk with Jason Graves, who did the score for Dead Space you didn’t realize you loved until you thought about it just now. Jason has been composing scores for games for the past seven years after a successful career scoring trailers, films and commercials. Getting a chance to talk with a game composer of his ilk let us into the world of game music and revealed some interesting facts. Read on to discover all the secrets of composing a score in four layers, what makes scoring for games better than film and why he doesn’t care if no one thought there was any music in the game.

Matthew Razak (TVGB): Let’s start at the beginning since that is always a good place to start. Did you know about Dead Space before and wanted to work on it or did they throw it at you?

Jason Graves (JG): The whole idea behind Dead Space was this little team at EA who got to go off on their own and come up with a concept. They had a year and I was brought in about half way through that first year. No one had been talking about it yet, EA had been putting calls in to get demos, to get ideas on who they could collaborate with. This wasn’t something like most games where the game is almost done and they have temp music in and they know what they want exactly and the composer just comes in. The audio director, Don, had an idea of what he wanted it to sound like but at the time my agent had contacted me he had hooked onto Christopher Young, who got his name doing horror scores.

I sat down and was fairly familiar with Chris’ stuff and had some of his scores and knew a lot of his music and put together my interpretation of what his stuff would sound like. It’s not the final score, the final score is more rough. Within ten or 15 seconds of the first track he knew I was the guy cause that is what he heard in his head. One of the pieces I had was one we ended up recording live note for note at the first recording session, and that’s the piece that plays in the final credits of the game that shipped last week, which was cool. We ended up going a lot more experimental with the remainder of the score.

TVGB: Experimental? How did that come about and was it helpful to come on that early to the game?

Yea, absolutely. It’s not like I’m sitting in my studio working on the game 40 hours a week at that stage though. I’d work for a few weeks on something and then Don would come back and say work on this. So the first year wasn’t as fulfilling as the last months. But what was really neat was seeing how EA had solidified the game. It was really neat following through with Don’s ideas, he respected anything I’d suggest and asked me questions. I imagine there was close to 40 minutes that was written that never made it and some games only have 30 minutes of music in total. There were a couple of rules we came up with. Number one, no trumpets. French horns were OK but they had to be low and scary or high. No electronic stuff. It was OK to have big drums. It was OK to have orchestral stuff, but it had to be avante garde kind of orchestra. And if we hadn’t spent that year doing it, it wouldn’t have come out like this. It was supposed to take an orchestra and treat it almost like sound design where it’s making it scarier but not through a conscious thing. If we didn’t have that year of pre-production on the score it would have come out a year behind and it would have taken you out of the horror aspect.

TVGB: You mentioned Chris Young, but what other Influences were there for Dead Space‘s score?

JG: There weren’t any specific movies. The game referenced games and movies. I think it worked really well too. There are some classical pieces that are used in Kubrick’s adaptation of The Shining where the orchestra is doing the percolating thing. It’s really more this crazy sound effect more than music and those were influential. Dan and I both honed in on that one like the same day. Those two minutes of music were pretty much the influence for the final direction of the score. It was more sound design than thematic music in your face and the lack of a theme and that kind of comfort of hearing a scale and regular music integrals I think makes the game experience more unsettling and unpleasant.

TVGB: It sounds like there were plenty of aspects to the score. What to you was the most important thing about the Dead Space score? What made it special?

JG: There are two parts to it even though it’s one big part. It’s the way it was recorded and implemented into the final game. Because we had the idea of how we wanted the music to play back, the problem was we wanted it to be really interactive. Not in the way it worked in the past which is you walking into a room and the music starts playing and you’re going “where’s my enemies”. One of the things that we wanted to achieve with the adaptive music in Dead Space is that we wanted it to play out more like a film score than a game score.

It doesn’t build up before someone attacks you but when someone attacks you. It’s reacting to the gameplay more like a film. Don came up with this four level music score that interactively mixes four levels of score and asked me how I would approach a four layer piece of music, so I had to figure out how to make it jump around from layer to layer. Every piece of music was broken down to four independent layers with the orchestra so they could mix and match, like the pieces of the puzzle. And in the end that gave me a lot more weapons in the music because you had all these musical effects that you could work on. I think that might have been the biggest thing.

TVVB: That sounds really amazing. Clearly a lot of effort went into making the score work. How important is a score to horror?

JG: It’s more than half of the experience. If you’re talking about genres outside of horror then music can make you cry or it can make you feel a little more tense or excited, but with horror stuff you put the music in, or audio in general, and the movie goes from scary to down right terrifying. If you watch a scary movie with the sound off it’s not that scary, but just the sound without the movie can scare you easily. Especially when you get into that kind of spooky or suspenseful music. There’s something about scary music like that that takes about two seconds to get you. Even if the gameplay isn’t the scariest thing you’ve ever seen, you put music and sound effects over and all of sudden you’re running for your life. It also sucks you into the game and makes you part of the game.

TVGB: What do you go for when you’re scoring horror? How is it different?

JG: The nice thing about the score for Dead Space and the interactivity of the genre itself is that it all kind of fit together in this nice neat package because we wanted the scare to have this non melodic, barbaric raw non-structured kind of feel. With horror, the only real rule is that there are no rules. You can have the orchestra playing a cacophony of sound and it makes sense in the horror genre. It was really both intimidating and freeing to have no constraints and what made it even more so were the two orchestra sessions that I had. There were no examples and no way to do a demo because they’re weren’t any recordings that you could use in this. So everything was written down on paper. There weren’t demos passed back and forth. It was wonderfully liberating to not be constrained by technology but it was also really scary because as far as I know no one has ever tried a full day of experimenting with avante garde music for a full day. The end result fortunately came out being better than I had ever had hoped. None of that would have been possible outside of the horror genre. The genre dictated the music and the music was the perfect type for the interactive engine we had. We couldn’t have done it if it had to be tonal and had a drum beat and all the typical stuff that you hear in action kinds of games.

TVGB: How did you get involved with scoring games? You have strong background in film and television too.

What I did about 12 years ago was go out to the University of Southern California’s Film and Television school. I met a bunch of cool people and made cool contacts. I ended doing a lot of work for commercials and indie trailers. There was someone back in NC, where I grew up, who was working on a videogame and needed a score. I came back from LA to NC and got a sort of big fish in a small pond effect. More local guys needed help with music and with live musical orchestras on some games. That’s kind of how I got roped into my first game. It wasn’t like I wanted to do videogames. At the time there wasn’t a whole lot of live music going on. I thought it was really cool being able to work with the orchestra and having more freedom and I thought it was just a blast to work on and figured maybe there’s something more I could do and switched my focus over from film and television to doing games.