Either my stomach is getting weaker with age or games are getting really bloody gory of late. What can be more twisted than cutting someone up and eating them? Cutting someone up, cooking them, and then feeding them to someone else of course! This is especially so when that customer doesn’t know that their favorite pie “might contain people.” This is just part of the premise of Ravenous Devils, a deliciously dark offering being brought up to our PC screens. We’ll obviously be indulging but if you want the short version I covered a little bit of this title here a while ago.

We’ll be headed on a journey to the brutal streets of Victorian London in Ravenous Devils, in a story that would make Sweeney Todd blush. You’ll be stepping into the shoes of a couple that takes their work very seriously. It’s hugely important to take pride in what you do and this still applies if you also happen to be a serial killer. The wonderful thing about London is there are a lot of people in it. This means that folk really won’t notice if the odd unlucky soul happens to go missing. In running a tailor that just happens to be on the floor above a pub/eatery you have the perfect setup to off a few unfortunate souls, dispose of them, and then make money off their remains.

The plan is simple. Customers arrive at the tailor for a measure-up, they are brutally stabbed to death with a pair of scissors and dumped down a shaft into the kitchen below the eatery. While the blood is being mopped from the floor above, the body is being minced for pies or turned into sausage meat. These delicious foodstuffs are prepared and sent up to unwitting, hungry, customers, more than willing to pay to get their fill. In the meantime, the clothes are kept and repurposed into garments to be sold in the tailors. Smart? Well, it’s definitely a cheap and easy way to gather supplies. As long as you don’t get caught there is a lot of money to be made. You’ll just have to hope that nobody knows who you are. You’re a little bit on the run after another business opportunity didn’t go quite as planned. 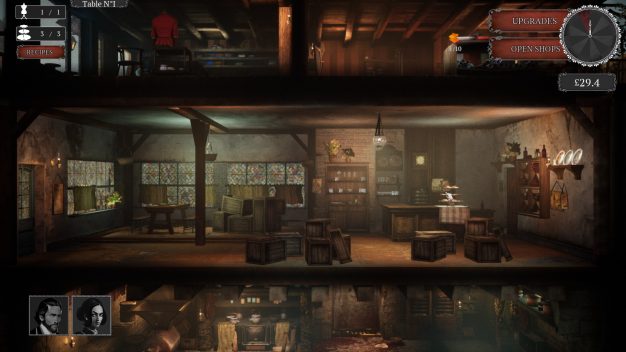 Bloody hell this title is gory! There’s nothing like watching someone being stuffed into a meat mincer to put you off food; for life. Nothing about this title is for kids or people with a weak stomach. If you love a bit of blood and murder. though, Ravenous Devils has all the ingredients for a really good time. Graphically, therefore, the setting is absolutely perfect. Dark, grim, and full of guts. Just the way Victorian London should be; apparently.

The gameplay in Ravenous Devils takes a little getting used to. In most dash games you’re playing across one plane. You might be in a restaurant or diner in some games, in others behind a counter doing the cooking for a range of guests appearing in front of you. In both of these scenarios, it’s a level playing field you’re moving around. Here, everything is vertical. You have the kitchen in the basement of the shop with the eatery above. Then above that is the tailors. This means that there is a lot of backward and forwarding to be done. The fact that you’re juggling two characters also takes some acclimatisation. If you’re in the kitchen cooking you can’t concentrate on what the customers are doing above you and can’t even see the tailors. The same applies vice versa meaning that if you’re murdering/making clothes/serving customers above you can’t look after the food. This is definitely a playstyle that takes a little getting used to but it’s fun when you do. 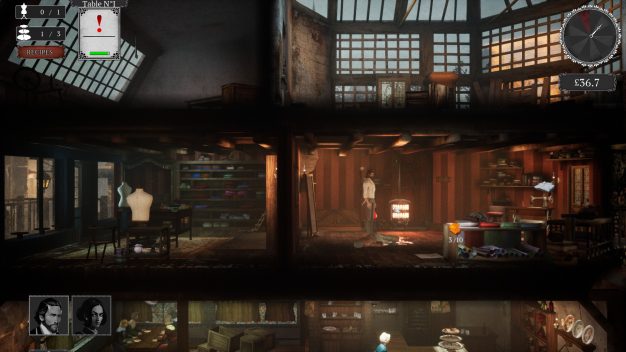 Bodies create a lot of mess. Be sure to mop up after yourself.

There is a certain amount of smoke and mirrors where the gameplay is concerned. The actual gameplay loop isn’t that inventive. Just like any other game in this genre you’re following a series of steps. The more upgrades you add, the more steps you add but it’s still a case of following a pattern. As an example, you start off with just an over-the-counter eatery. As the upgrades come you start adding tables.

Serving customers on these tables often means cooking for them to order which means you’re not refilling the cabinet for the walk-in diners. This instantly makes things trickier, add to this the work that needs to be done in the tailor and suddenly things are getting tough. The more tables you add, the more money you’ll make but the more difficult this process becomes. Let’s not forget that you need a fresh stream of bodies to cook with so you need to get good at working in tandem very quickly. 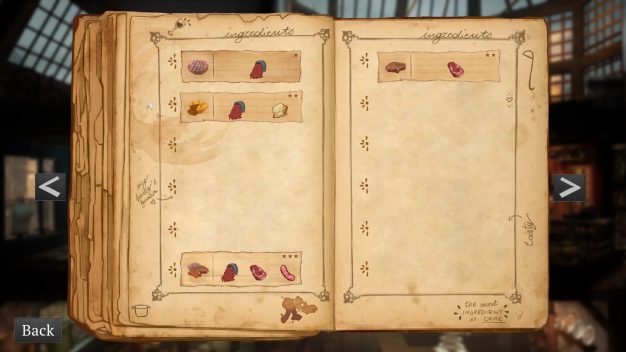 So many delicious recipes! You’ll fill your book as you go.

The gameplay loop isn’t necessarily something that makes this game stand out. Although what you’re doing is different, as is the overall layout of the game, the basics are still fairly similar to what we’ve already seen before. What makes Ravenous Devils worth playing is the story. Without going into any detail it’s really dark, creepy, and well written. As the game progresses you’ll also have the added headache of having to kill to order. Someone knows what you’re up to and will allow you to continue what you’re doing as long as you keep them well fed. They have some rather exotic tastes though that you’ll need to fulfill if you want to stay out of jail and away from the gallows.

More than anything else Ravenous Devils is a game of planning. As I mentioned earlier the game gets more difficult as you make certain improvements to your shop. This doesn’t just come in the form of adding space for customers, though. Buying new ingredients and adding new recipes to your book is a great way of earning more money. As recipes get more complicated you’re also adding steps to the cooking process. 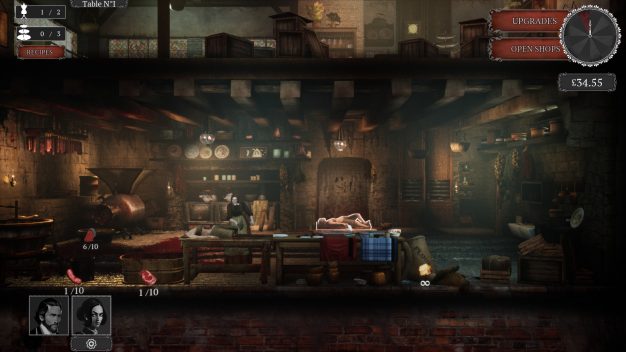 Well, where else are you going to get steak at a decent price?!

With this in mind, I think it important to concentrate on making your life easier with better ovens, more cooking space, or better gear for the tailor first. Once you’ve managed to equip yourself properly you’ll be ready to go deeper into the game. I think being greedy early on is a mistake as you’re just going to give yourself an unnecessary headache.

Ravenous Devils is a deliciously dark dash (say that three times fast), a game with an engrossing story and a bunch of different ways to play that will come from your own planning. I’m not usually one for time management games, simply because they get a bit samey after a while. This isn’t necessarily a negative on any specific title, it’s just the nature of what they are. It’s the story in Ravenous Devils that elevates the gameplay enough to keep you wanting to come back for more. There’s also something quite satisfying about the upgrades. If you want to see a bunch of different ways you can “prepare,” a body this is where it’s at. 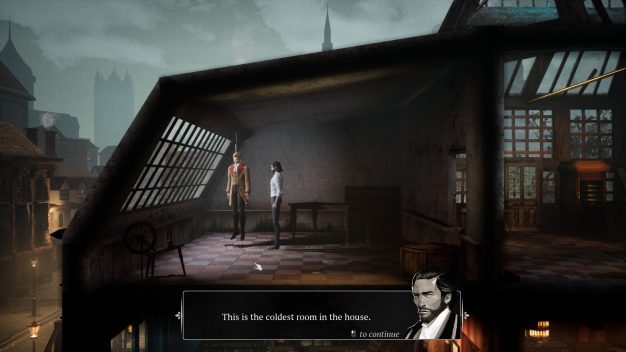 All in all Ravenous Devils controls like a charm, looks gorgeous, and is really addictive. There isn’t a massive amount not to like here. This is the sort of game you play for five minutes, then wonder where your afternoon has disappeared off to. Plus the fact that there aren’t enough games that let you be the bad guy, and the whole “reverse horror,” trope is a breath of fresh air and something I can really see myself getting on board with. If you don’t like repetitive games this won’t be one for you as it’s not something you can really get around. Equally, if you don’t have a strong stomach, or are below a certain age, (yes you know who I’m looking at,) then you might want to steer clear. If none of the above bothers you or you’re a big fan of time management sims and looking for something new I’d strongly recommend giving this one a whirl. As a last note, Ravenous Devils is the princely some of £3.99. This is an absolute steal for the game you’re getting. Ten out of ten on value for money, and even more reason to see what you think.

Ravenous Devils is breathing some much-needed life into the dash genre. This game is gritty and really dark. The story is also very well written and will easily pull you into the game and keep you there. The main downsides here are the difficulty which can be absolutely savage and the themes that are being explored. If you like your games frantic you’ll love this one, if not you’re going to be in for a frustrating experience. This is a game about cannibalism amongst other things and the story reflects that and is absolutely dripping in gore. If you don’t have a strong stomach or might find some of the themes explored upsetting this isn’t the game for you. There is a definitely cautionary note to be made to parents of younger players too. This is not a title for the kids.