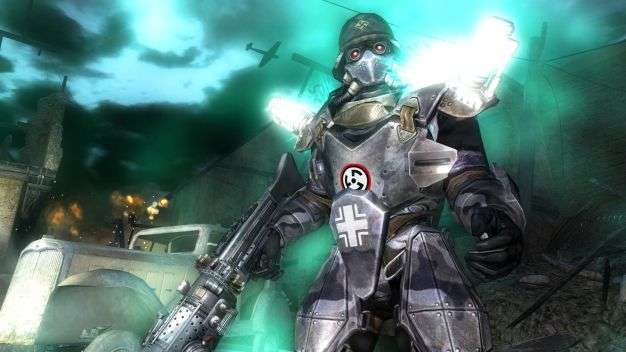 At Activision’s NYCC event we got plenty of hands-on time to slaughter New Yorkers, mutants, henchmen, soldiers and other nefarious evil doers when we played both Prototype and X-Men Origins: Wolverine. However, we did not get the chance to slaughter the greatest villain in any form of entertainment, the Nazi. This is because Wolfenstein was only eyes-on at the time and thus we had to settle for watching Nazis getting shot by a few of the game’s developers.

This being said, shooting Nazis still looks like it’s pretty fun and it appears that the newest title in the Wolfenstein series will at least be full of plenty of opportunities to blow things up good. Really, what more do you want from your occult WWII shooters? Well, maybe a bit more, like creepy time controlling veils, strange occurrences that cause gravity to disappear, ray guns that disintegrate multiple men at a time, and a bit more strategy than the original Wolfenstein had, which, in fairness, doesn’t take much.

The level we were demoed was near the beginning of the game in which B.J. Blazkowicz, the series’ constantly returning bad-ass hero, is once again called into the battle in order to take out some Nazi jerks. Also once again strange experiments are going on and B.J. is getting stuck in the middle of them. In fact about two minutes into the level, after B.J. has successfully blown up a Nazi supply train, strange stuff starts going down. Nazi soldiers suddenly start flying into the air, not only making the rooms you enter look like a scene out of Mary Poppins, but also making them pretty easy targets. Yes, once again Mr. Blazkowicz is in the middle of some strange Nazi shit.

So far in our eyes-on time the game had looked pretty standard, outside of the airborne Nazis. Realistic looking WWII guns were used to shoot realistic looking Nazis, while realistic looking freedom fighters shot back at them. It’s all very reminiscent of every other WWII game you’ve played. Even the HUD brings back memories of Call of Duty 2. 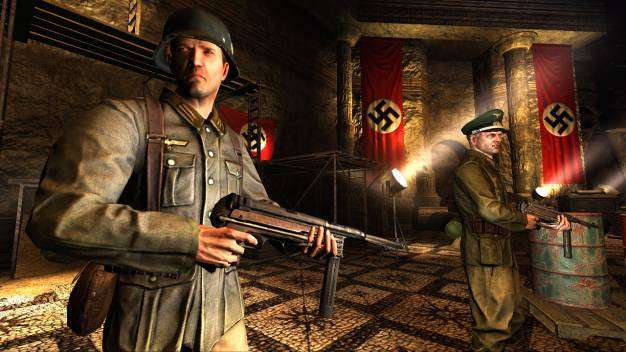 This is Wolfenstein though, so once things go crazy they go all out. After the explosion with the train and the flying Nazis it turns out that whatever the Nazis were experimenting with has given B.J. some powers. It seems that these powers allow B.J. to look into “The Veil” — a sort of other world that exists within ours. Players can access this world at any point in the game and it allows them to see things that aren’t visible to the human eye and also grants them certain powers to help them defeat tougher enemies. When activated, “The Veil” turns the world a greenish blue and the enemy’s eyes start glowing (presumably because Nazi’s don’t have souls, but also a great design choice since the layer of blue coloring makes it harder to distinguish between good guys and bad guys).

One of the things that B.J. can see once he has “The Veil” equipped are Geists. Geists are creatures that live in “The Veil” world and feed on the power of it, which resides in pools that can be seen once “The Veil” is turned on. These Geists won’t really attack B.J., or anyone else for that matter, unless provoked, but they can be used as a weapon. Shooting one near some enemies will make it explode and electrocute or “veil” the enemies. These were the only creatures that we got to see that were revealed by “The Veil,” but the devs hinted that there might be more.

The powers of “The Veil” are not just about special sight however as B.J. will learn a few tricks as the game progresses. We got a peak at his ability to slow down time, giving players a chance to take out more enemies in a tough spot or maneuver a little better. It will also allow to check out opponents’ weak spots. Near the end of the level we saw, B.J. and his compatriots were attacked by a Nazi ultra-soldier, which looked part robotic and part human, but all deadly. By using “The Veil,” the player is able to see the soldier’s three weak spots and take him out more easily. Not only did this create a layer of strategy to what would otherwise be a generic fight, but we also got to pick up a ray gun, which looked like a blast to play with. 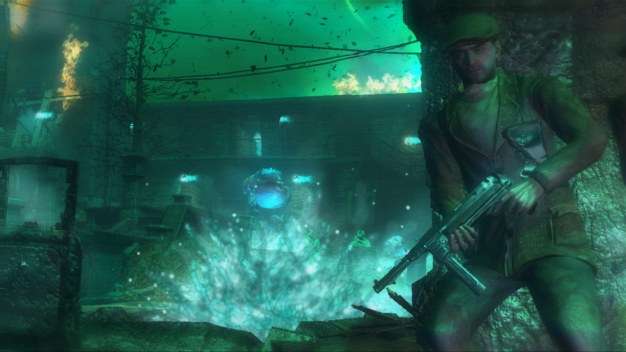 Weapons will clearly vary from the standard issue arms of German and Allied soliders as the occult plays such a major role in the game, but the particle gun was all we got to see of the weapon variety. There will be a “Black Market” that will allow players to purchase weapons and ammunition while also adding “some more depth” to the game. Not sure what that means, but it could be customizable weapons or weapon upgrades or maybe weapon conversions so that standard rifles turn into occult mega-guns that shoot evil curses. Probably not, but no harm in dreaming.

To tell the truth, I was pretty skeptical about the game going into the event and after watching it out of the corner of my eye for a while I was even more skeptical about it being any good. Once I got a close-up walkthrough of the game though it showed some potential. It’s still very easy to see Wolfenstein being nothing more than a rote shooter, but it sounds like Raven has put a bit more thought into it than a cursory glance suggests. Once we get some hands-on time we’ll let you know, or we can all just wait until Wolfenstein lands on the 360, PS3 and PC some time later in the year.